There have always been women in science. Whether recognized at the time or not, women interested in science and engineering have made important discoveries, conducted game-changing research, and pursued careers in science, technology, engineering, and math (STEM).

In honor of Women's History Month, MatSE celebrates a small sample of the women scientists that have made a lasting impact in materials science and engineering.

In the first of a two part series, MatSE community members present information of some noteworthy women scientists that have had an impact on the field of materials science. Many of those featured are women with connections to Penn State.

This is the second in a two part series, MatSE community members present information of some noteworthy women scientists that have had an impact on the field of materials science. Many of those featured are women with connections to Penn State.

Information below provided by the Materials At Penn State Historical Poster Project. 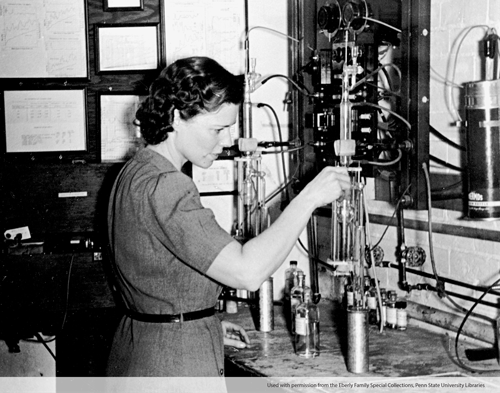 Quiggle, a Pioneer for Women in STEM

DOROTHY QUIGGLE - Advocate for women in engineering and the first female ChemEng Ph.D. in the U.S.

Quiggle authored or co-authored numerous papers on petroleum chemistry and analytic tools. In 1939, she was awarded a patent for a solution to rapidly remove free oxygen from gases. An ardent advocate for the advancement of women in engineering and science, in 1991 she initiated and was honor-ary chair of the first conference/reunion of Women in Engineering at Penn State, bringing more than 150 alumnae together. She super-vised and advised five generations of undergraduate and graduate engineering students.

MARY WILLARD - She used her chemistry and microscopy expertise to assist Scotland Yard.

Mary Willard was born in 1898 on the Penn State campus. The daughter of Prof. Joseph Willard (Willard building), she graduated from Penn State with a bachelor’s degree in chemistry in 1920 and became an assistant in the Chemistry department. She obtained her doctorate from Cornell in 1927 and returned to Penn State as an assistant professor. Willard was well known for her microscopy research (second only to research at Cornell, according to Frank Whitmore). An organic chemist, Mary Willard was internationally known for her forensic science research. She was frequently called upon to help the state police and served as an expert witness on many cases, including murders and suicides. She helped with cases all over the world, including Scotland Yard and Interpol. A Pittsburgh newspaper dubbed her “Lady Sherlock” for her solutions to crimes across Pennsylvania. After retirement in 1965, Mary Willard continued her forensic work with Interpol. Also highly regarded for her mentoring of both female and male students, Willard was the first person to be recognized by Penn State for excellence in teaching. She died in 1993. 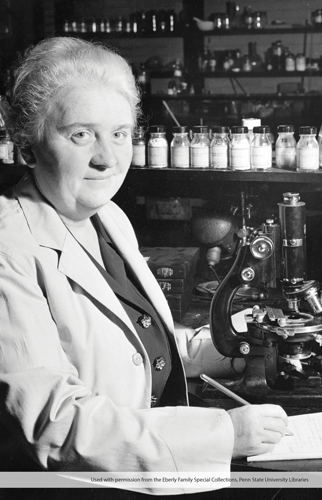 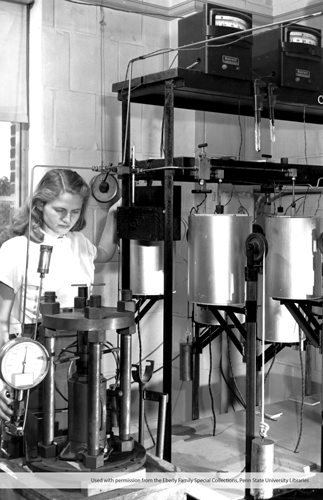 DELLA MARTIN ROY - She was Penn State's first woman elected to the National Academy of Engineering.

The founding editor of the journal Cement and Concrete (1971-2005), Roy was cited by the NAE “For internationally recognizedcontributions to applied science and engineering of cement and concrete.”

Her patents range from porous biomateri-als for bone repair to methods for radioac-tive storage. The mineral dellaite, which she synthesized in 1965, is named for her.

A founding member of the Materials Research Laboratory, Roy is the author of over 400 publications. She retired from Penn State in 2012.

CADETTES EARN THEIR STRIPS - They went from clerks andwaitresses to engineers.

Penn State was among the most active American universities in training women engineers during World War II. This group of Cadettes from airplane manufacturer Curtiss-Wrightunderwent a 10-month immersion in aviation technology and science for 30 hours per week. The Cadettes could “absorb and apply much more engineering training than anyone anticipated,” said the assistant dean of engineering. 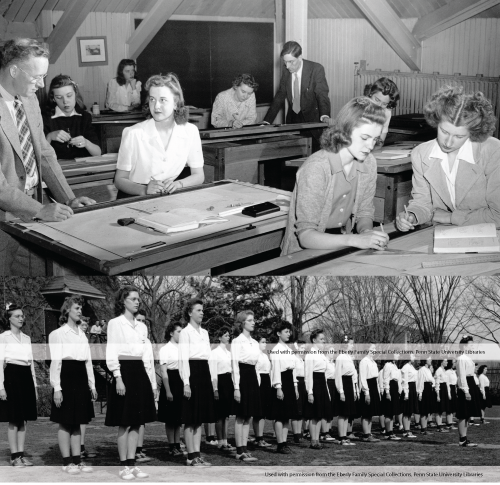