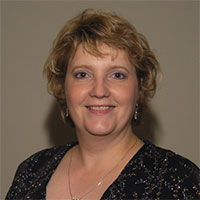 Ruth Ann Wood has been employed with Pall Corporation in Cortland, NY since 2005.  Ruth Ann is currently the Global Engineering Manager for Filter Elements in the Industrial Process division with Pall.  She manages design engineering functions in the US, Europe, and China for new filter element products within the Industrial Process line of business at Pall.  Prior to her current role, Ruth Ann was a Senior Manufacturing Manager at the Pall Cortland facility with responsibility for production of media for metal filter element construction.

Prior to her career with Pall Corporation, Ruth Ann was employed with Ashland Incorporated for 15 years (1990 to 2005).  Ruth Ann held a number of roles at Ashland with the Specialty Chemical division.  She started her career with Ashland in R&D developing environmentally compatible foundry binder systems for metal casting.  From 1995 to 2005, she developed refractory coating systems for lost foam casting and was considered an expert in that technology, receiving an American Foundry Society Division 11 (Lost Foam) Outstanding Individual Service Award (2004).  Ruth Ann was also the recipient of an American Foundry Society Service Citation (2005) for contributions which had refined the lost foam process into a cost-effective method of manufacturing castings.

Ruth Ann has been a member of the GEMS (Graduates of Earth and Mineral Science) Alumni Constituent Society since 2004 and has served as board president from 2010 to 2012.  She has actively supported GEMS sponsored events including the alumni dinner at TOTEMS (Total Orientation to Earth & Mineral Science) and alumni involvement at EMEX.  She was also a recipient of the Material Science and Engineering Distinguished Alumni Award in 2012.