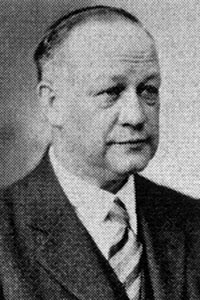 David McFarland was born in Mansfield, Ohio on August 1, 1878. He grew up in Lawrence, Kansas where, in 1900, he received the A. B. Degree in chemistry at the University of Kansas. He immediately joined the chemistry department of the University and began teaching metallurgy. During that decade, he acquired his A. M. degree at Kansas in 1901, his M. S. at Yale in 1903, and his Ph. D. at Yale in 1909.

Meanwhile, he served as chemist and geologist with the University Geological Survey of Kansas from 1899 to 1908, contributing survey papers on the mineral waters, lead and zinc, and oil and gas of Kansas. That connection led him, in collaboration with H. P. Cady, to the discovery of helium in natural gas (1903) and the development of a method for its extraction, which has been called the foundation of the helium industry.

From 1920 until his retirement in 1945, McFarland served Penn State as professor and head of the Department of Metallurgy. During those 25 years, more than 400 young men were graduated in metallurgy under his guidance; a large number of them subsequently attaining positions of power and responsibility in the metallurgical profession. Something of the character and influence of this gentle teacher is revealed in the affectionate respect with which these men have continued to regard him.

In 2004, the award expanded eligibility to include not just metallurgists, but the entire field of materials science and engineering to reflect the changing times in academia and industry. The award was renamed the David Ford McFarland Award for Achievement in Materials.